About me: I love teaching folks about cloud computing and serverless tech and architectures.

I have lived all over, from Virginia to New Mexico to Germany to Texas and New York City. I absolutely love traveling and have been to 57 countries (and counting!).

I enjoy meeting new people; check out this newspaper article of me meeting folks via an app called BarCards. It was an app created by my friend Garrett but sadly the app is no longer available.

Developed in all tiers of the application, from database design to business logic to front end user interface programming, with an emphasis on usability and building intuitive applications.

Prior to Google, I worked in the cloud industry at Rackspace as a software engineer. Before that, I led engineering teams at an e-commerce company, non-profits and tried my hand at creating two startups. I'm often on the running trail, volleyball court or kickball field.

I earned a bachelor’s degree in computer science from Texas A&M University.

Here's a time I was quoted in the campus newspaper when Aggie Bonfire was canceled: "Bret McGowen, a junior computer science major, said Bowen's decision is hard to stomach." 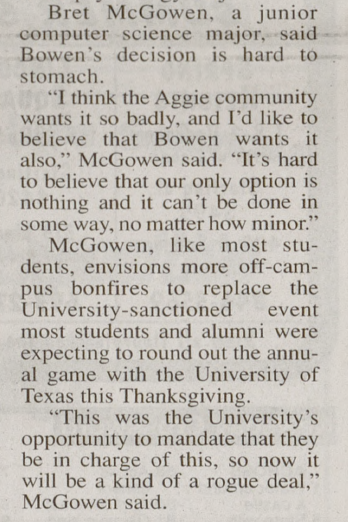 Check me out on Stack Overflow: